Report from the Digital Signage Expo


This is a guest post from Neale Stokes of the Los Angles Public Library detailing his experience at the Digital Signage Expo in March. He offers an overview of the conference, and some of his takeaway thoughts.

Just over a year ago, I joined the Los Angeles Public Library’s newly formed Digital Content Team. Shortly thereafter I began creating and curating content for a project that was already underway: a new 28-foot video wall in one of the most prominent spaces in the library. The screen would be located in the library’s atrium–it would be a focal point in a massive, seven-story space, visited by thousands of people a day. With a background in video and media production, I was excited by the creative possibilities and took a hand in creating much of the content for the video wall. I spent several months shooting footage, editing, and creating motion graphics to fill this new space with content before a planned summer opening. I also sought out existing content which might be a good fit for the wall, and through a combination of internet browsing and networking, we’ve discovered and featured several works of video and digital art by emerging artists and filmmakers. The experience of programming for the video wall was a crash course in content production for a publicly viewable, immersive video screen, and also was instructive in how little information or guidance about this type of work is easily available or parseable on the internet or elsewhere.

With the maintenance of our video wall ongoing, my department also has been slowly enhancing several existing ad-hoc, rudimentary digital signage systems, and has plans to work on developing a plan for future systems, both here in our central library and eventually system-wide. It is in this context that I learned about the Digital Signage Expo (DSE), and with the blessing of our training office, hopped on a 737 to Las Vegas this past March to check it out. 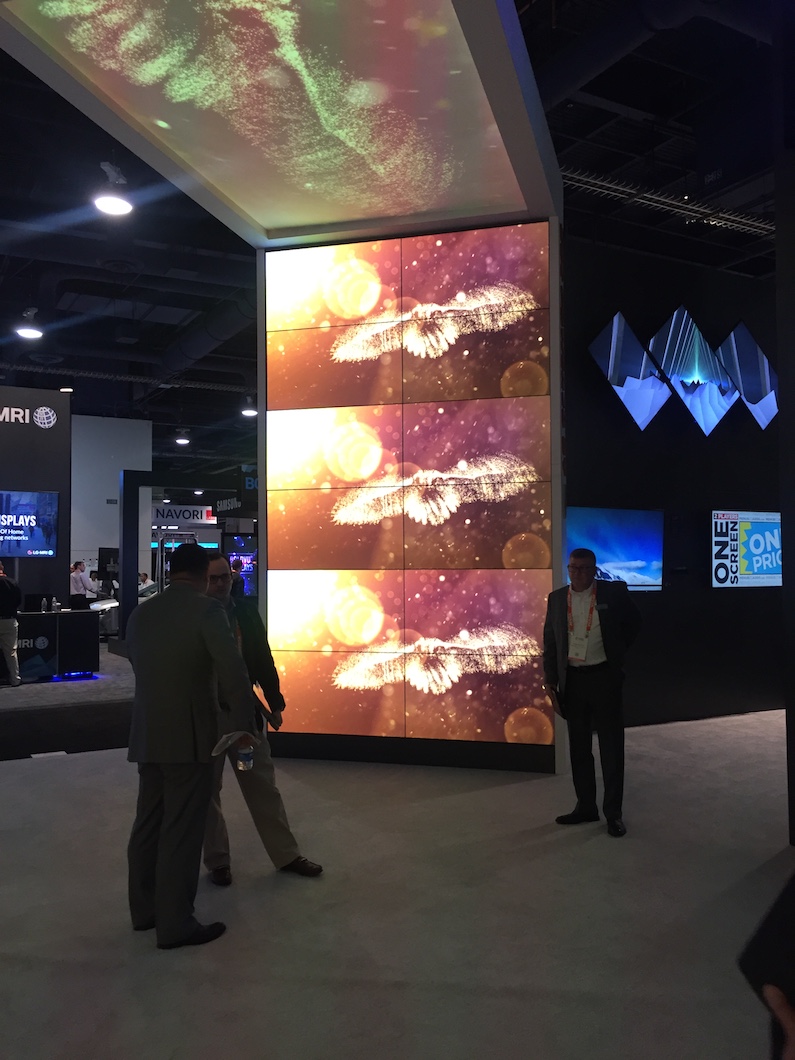 What is the DSE? Good question. My immediate impression was that it was an overwhelming industry trade show, consisting mostly of a massive exhibition of expensive and flashy tech, an aircraft hanger full of every size and type of digital screen you can imagine, filled with eager sales reps trying to make eye contact long enough to pitch you their particular light-emitting rectangle.

In my experience, that’s sort of what digital signage feels like out in the world, to someone with little knowledge of it as an industry or as a medium of communication. In a seminar, a speaker made the point that “digital signage is not google-able,” and this statement perfectly echoed so much of my previous frustration trying to learn more about how to “do” digital signage. Search for “digital signage player,” for example, and you get at least half a dozen ads, followed by countless links to nearly indistinguishable signage-related companies. There are no books, no obvious trusted sources to parse and get a better handle on what you actually need. I can say that after 3 long days at the DSE, I saw a lot of cool glowing rectangles, but I also gained a high-level view of what the digital signage field looks like, how its players interact and fit together, and where I could start gathering information for future projects.

I attended a handful of workshops at DSE, trying to stick close to my own roles relating to digital signage, that of content creator and curator. The first and perhaps best session I attended was with Michael Luck Schneider of ESI Design. His talk was titled “Designing for the Non-Traditional Canvas”, which referred to a new paradigm in content design for architecturally integrated immersive digital displays and projection, as opposed to the “traditional” canvas of a 16:9 aspect ratio TV on a wall. Michael’s work–on corporate lobbies, auditoriums, shopping malls, and more–fully integrated things like direct-view LED screens, laser projection, generative digital art, and abstract soundscapes with architecture, furniture, analog signage and interior design elements to create immersive and compelling experiences for the occupants of a space. This session, rich in real-world examples of what works and doesn’t for such design, was valuable as a counterpoint to what I felt was a dominance of the advertising and marketing dimension of digital signage. It also most directly related to my work as a content manager for my library’s video wall.

While it may be common to view screens and digital devices as inherently distracting, removing viewers and users from a mindful connection to the physical world and human interaction, Michael and ESI’s work runs counter to this by integrating physical spaces with their surroundings and built environments. The use of the “non-traditional canvas” is key here; in one case, a corporate lobby that once felt like a gilded, sterile box, stark in its isolation from the outside city, was enhanced through the use of a narrow band of direct-view led panels that brought views of the city’s skyline inside the space. The significance of the novel also was a key theme in michael’s discussion, as he pointed out that uninspiring spaces result in unproductive work, and that through adding elements of the unexpected and vivid, surprising experiences to a physical space through the addition of a “digital intervention” as he termed it.

A trend that Schneider emphasized was the increase of network bandwidth and processing ability to facilitate cloud-based or remote processing to feed generative pieces. At the moment, many of ESI’s installations require on-site powerful computers to feed their installations, but he feels like the ability to do “near-time” instead of real-time processing and make use of remote or cloud-based computing will reduce the weight and footprint of these installations and make them more cheaper and more accesible to locations with limitations for local maintenance and support. 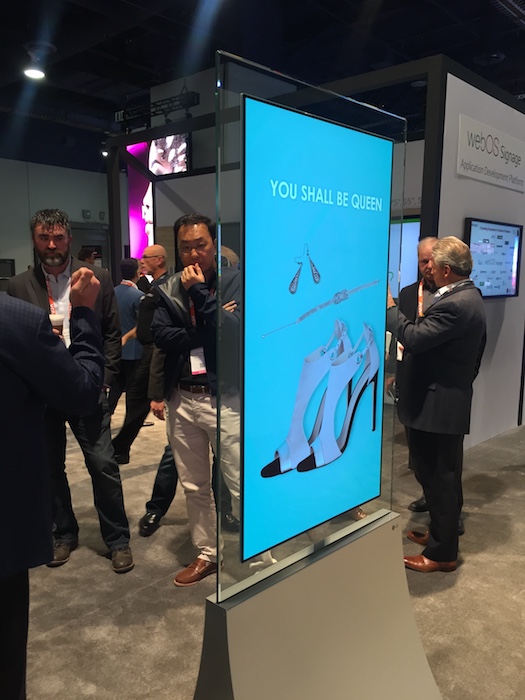 Another talk I attended was “Understanding the Parts of a Digital Signage Network,” a high-level overview of the typical digital signage system. While the presenter dutifully touched on all the parts of a network, including displays, media players, IP infrastructure, etc., the biggest takeaway was that these components are both meaningless without content, and must in fact be 100% driven by the content you wish to display. While the DSE showroom floor is full of flashy tech, all projects must start with an objective, a message, and content before technology can even be considered.

I attended a handful of other talks, covering CMS selection, interactive exhibit design, industry tech trends, and more. All were worthwhile to some extent–as someone with little knowledge of the digital signage world, I found that each session filled in a little blank space or answered a question I hadn’t yet known to ask. Here are some random highlights from the many notes I took in these sessions:

The DSE offers a few of these all-day certification programs, but due to scheduling I really only had one option, Friday’s “Digital Signage Content and Media Expert.” Fridays at conferences are always a little weird, and while the convention center was nearly deserted other than the surly crew busily striking the massive showroom, once I settled into this session it occurred to me that it might be one of the most valuable parts of my DSE experience.

Conducted by four speakers over a full eight hours, this session covered a lot of ground, from basic communication principles to graphic design. And while I gained a lot from the entire day, I feel like the biggest thing I got out of the DCME program, much like the rest of the sessions I attended at DSE, was a reference point in a confusing and crowded industry. Participating in the program also gains me access to the Digital Signage Experts Group, an "impartial, agnostic, and vendor neutral organization providing professional industry certifications and recognition for participants at all levels in the digital signage industry."

So would I recommend attending DSE, especially to my colleagues working in visualization and immersive scholarship at libraries and educational institutions? My answer would be a qualified yes. If you’re involved in the planning and implementation of digital signage systems, immersive displays, large-scale visualization systems, or interactive design, AND you have the budget to send a person to a somewhat expensive industry trade show in Las Vegas, I think there could be some tangible benefit to attending. While it isn’t a conference I think I would attend more than once, for someone trying to gain a foothold and understand a confusing and rapidly developing industry, I think it was a valuable experience.

I’m happy to answer any questions about DSE or about my work at Los Angeles Public Library, and can be contacted at nstokes@lapl.org.