The Immersive Scholar program brings together a diverse group of universities to form a community of practice around immersive visualization technologies in libraries and learning spaces.  At UC Berkeley, we are exploring new directions for these technologies in a special kind of learning space: museums. In the context of research universities like Berkeley, museums are powerful environments for research, teaching and learning, and public engagement. Most often, each museum specializes in a domain such as art or entomology, and many are primarily devoted to research, having little or even no exhibition space. Brought together, however, they represent an incredibly rich resource and fertile ground in which to apply new technologies for visualization and engagement.

The Phoebe A. Hearst Museum of Anthropology at UC Berkeley is the largest anthropology museum west of the Mississippi, where professional anthropologists steward an enormous collection of material culture covering two million years of human cultural activity across six continents. The Hearst Museum manages 3.8 million objects, ranging from coins to audio recordings, but has only four thousand square feet of exhibition space. To overcome these limitations, they are continually seeking new ways to tell the stories that their collections can convey, stories about the very different cultures of the people who made the objects in the collections, and about ourselves and our place in history and in relation to others.

The Hearst Museum was among the first on campus to explore the potential of immersive visualization technologies to engage its diverse audiences of researchers, teachers and learners, and the inquisitive public. In 2016, Ben Porter, the museum’s director, joined a multi-university project funded by the University of California Office of the President titled “At-Risk Cultural Heritage and the Digital Humanities”, an effort by four UC campuses to preserve and share visualizations of archaeological and cultural heritage sites that are at risk from a variety of human and natural forces, from warfare to erosion. This project funded the installation of the HearstCAVE, a visualization wall made up of six 55” 3D Ultra HD OLED displays driven by a custom-built graphics workstation with two NVIDIA GTX 1080 video cards. The resulting immersive visualization environment has 6,480x7,680 pixels or nearly 50 million pixels (49.77 megapixels). 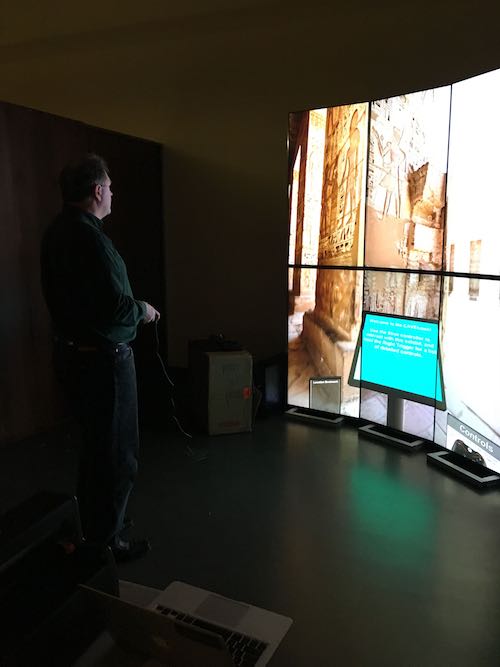 Because it was installed as part of the At-Risk Cultural Heritage project, the HearstCAVE’s primary use has been to display visualizations of cultural heritage sites for visitors to the visualization walls installed at the four University of California campuses. A custom-built Unity application shows visitors 3D images of several sites around the world, such as temples from Ancient Egypt. While many of the other visualization walls installed for the UC project are located in campus libraries, the HearstCAVE’s placement inside a museum provides a different set of motivations and opportunities. Most importantly, people come to museums to see things and learn something new. The museum environment is designed with an emphasis on experiences and engagement, features that align well with immersive visualization technologies.

This museum context offers additional opportunities for immersive visualization that take advantage of the higher education crucible of research, teaching and learning, as well as the incredibly rich content of the museum. Early on, museum director Ben Porter expressed interest in using the HearstCAVE to display 3D models of objects in the collection. Earlier work had focused on the digitization of richly inscribed Egyptian sarcophagi in the Hearst collections. Dr. Rita Lucarelli of the Near Eastern Studies department researches the materiality of magical inscriptions intended to help the deceased on his or her way to the afterlife, and 3D models provide the best method for documenting and analyzing these objects. Her project website demonstrates that immersive visualizations can be an important aspect of scholarship as well as viewer engagement.

Dr. Lucarelli’s research inspired us to build a student photogrammetry team that has continued to digitize dozens of objects in the collection. The team regularly meets on Friday afternoons, photographing objects and stepping through the photogrammetry process at the HearstCAVE itself where the powerful workstation and high resolution displays have been very useful. We call these work sessions “Photogrammetry Phridays”, and museum visitors frequently stop by to observe the team in process and ask us questions. As a result, our student team has become part of the museum visitor engagement experience. 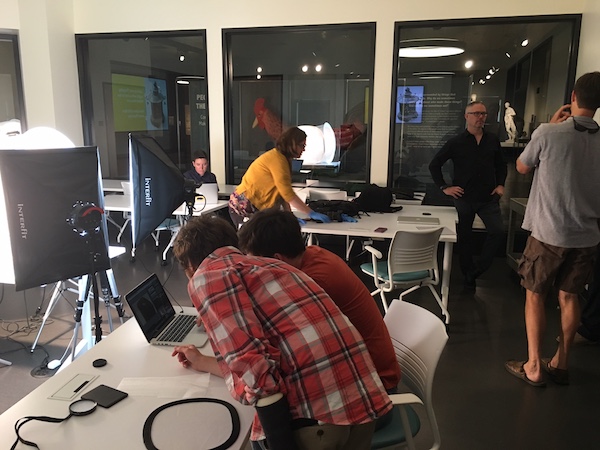 Once a year, UC Berkeley opens its doors to the broader community on Cal Day, when several hundred lectures, exhibits, demonstrations and performances are held to showcase campus departments and programs. The Hearst Museum is a very active participant in Cal Day, featuring folk dances, special tours, and makerspace activities. The HearstCAVE was also busy on Cal Day this year, with students giving virtual 3D tours and explaining how they create 3D models of objects in the collections. The team developed a coloring activity that demonstrates the photogrammetry process (from point cloud to textured mesh), inviting younger visitors to apply a texture to a mesh using crayons. Nearly 800 visitors explored the Hearst Museum in the most recent Cal Day this past April. 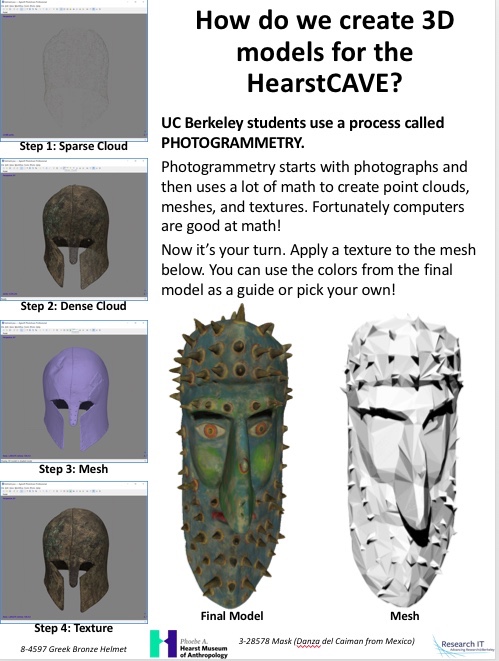 UC Berkeley’s participation in the Visualizing Digital Scholarship in Libraries and Learning Spaces project expands on this success at the HearstCAVE by bringing together a broader community of collecting institutions including three other museums (the Berkeley Art Museum Pacific Film Archive or BAMPFA; the University and Jepson Herbaria; and the UC Botanical Garden) as well as the University Library. Our expanded student team works with staff managing these very different kinds of collections -- from art and film, to botanical specimens, and the special collections and archives in libraries -- to begin tying these special collections together in a visually engaging manner. To begin, students working in our Herbaria have started digitizing an important collection of pine cones, specimens that are of special interest in California with its vast, and threatened, redwood forests. 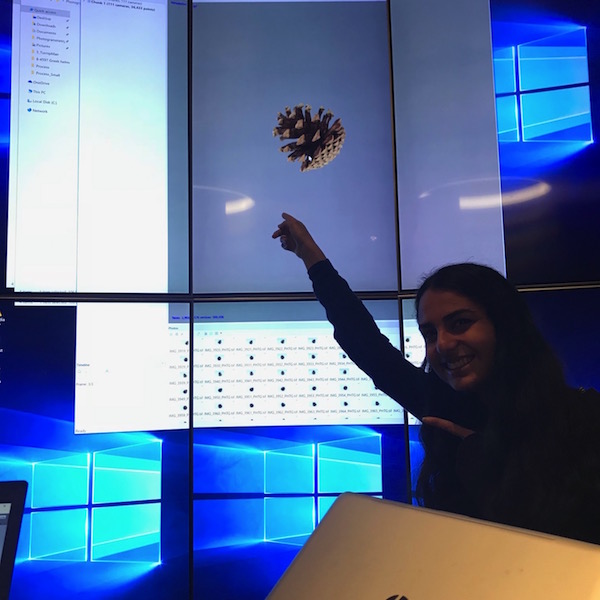 As our student team expands its photogrammetry work into new collections, it is also exploring other visualization technologies, including VR and AR, and we are developing real expertise building applications in Unity in order to showcase the final models and to tell stories about collections at UC Berkeley. Though the project is expanding in these new directions, the common themes of student engagement, immersive visualization technologies, and museum and library collections and contexts ensure that our efforts will have real impact.