While many of these spaces share strengths and challenges, there is also significant variation from site to site. The following is a quick profile of the Patrick Ma Digital Scholarship Lab (DSL) at Brown University Library.

The DSL was opened in the fall of 2012. It is a medium-sized room largely dominated by the 16x9 foot display wall located oppose the entrance door.

The furniture is fully moveable, allowing for a variety of configurations.

The wall is connected to a single computer, which can treat the wall as a unified desktop and view images at fullscreen across the wall at the highest resolution the wall can offer.

However, the wall was designed with collaboration in mind -- and so the wall is also connected to a Crestron video switcher that allows up to 12 devices (via HDMI or VGA) to be displayed on the wall simultaneously. There are 6 possible configuration available.

Like all technology installations, the context in which the wall was placed suggested certain functional expectations: it was placed in a closed room, but with a large window facing a relatively high traffic area on the main floor of the building.

The large room with all-moveable furniture made it clear that it was meant to accommodate potentially large numbers of people (up to 50 are allowed under the fire code) in a variety of activities.

In many ways, the most common uses for the wall have been a natural result of these decisions. The wall's placement in a room suggested pedagogical or presentation purposes, while the window made it a quasi-public space. As a result, the facility has been regularly used for classes, lectures, and workshops. 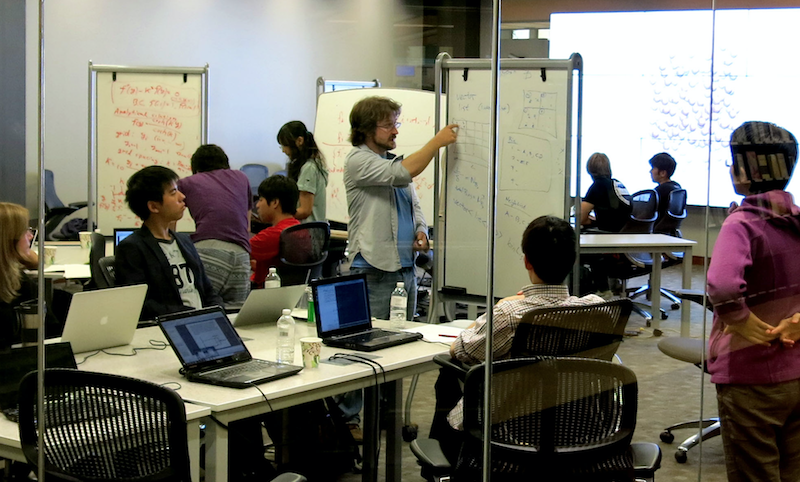 Of more interest has been the pedagogical impact. Over the five years, we've had a consistent use of the space for teaching purposes, and multiple courses each year use the room as their regular classroom space.

On several occasions, the DSL has been used for art installations, for which it is a gorgeous venue.

Despite early aspirations, research applications of the wall have been harder to come by. There have been some interesting uses, particularly in viewing large amounts of visual data, but in general whatever affordances the wall offers in a research context have not been enough to encourage widespread use.

The library has also engaged in some experiments with searching and visualizing collections in our digital repository -- specifically, the scanned historical plant specimens of the Brown University Herbarium, which were coded from the ground up using web technologies.

Immersive Scholar and the Glider project

The use cases described above directly inspired Brown's contribution to Immersive Scholar.

The Glider project is a platform for creating content for presentations, collaborative teaching, digital exhibits, and art installations. The intention is that Glider will provide foundational building blocks that will support these activities.

Some of the ideas behind Glider have already been tested; for example, an interactive public lecture on the history of the Herbarium was built on a prototype all the way back in 2015. 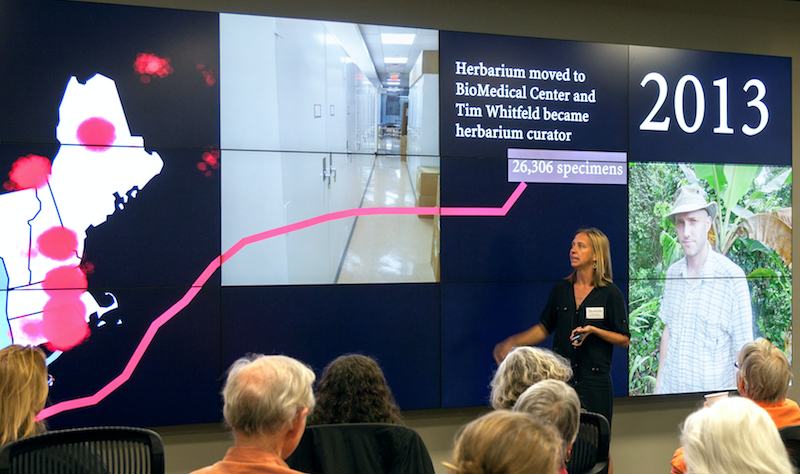 Glider, above all, is meant to be used, and will needed to be "tested in the field" to make sure that it meets the needs of wall owner. To this end, the proposal to ImmersiveScholar included series of pilots that will test the system in three different applications: as an interactive digital exhibit, as a classroom activities, and as an interface to our digital repository.

The display wall at the Brown Library will be our primary test site, but we are always looking for partners to try out Glider with their facilities. Please contact us if you would like to sign up as a guinea pig!